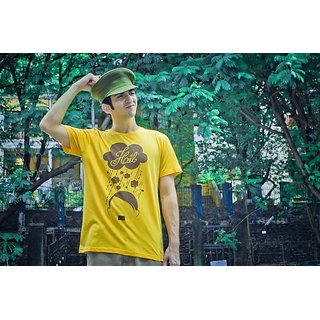 Get this for as low as: ₹617 How to earn CluesBucks+

#OnceUponATee One afternoon, he was strolling down the busy streets of Berlin, when he noticed a barber on the sidewalk. He made his way to the chair, sat down, and squeaked - "Can you take care of this?" He was nervous, after all, it was the first time he was going to get a shave.

As the barber sharpened his razors, a strong gloom took over the skies. The barber examined the clouds and opined, "Looks like it's going to rain soon." He sat there unperturbed.
As the barber went forth for the first stroke of the blade his hand was forced downwards by the strangest of projectiles. "Oh my, is this rain? It's never come down so hard," said the barber.

He got out of his chair and peered into the sky. As the realisation dawned on him, he yelled, with his outstretched arm pointing to the sky - "Nein! HAIL!" Passers-by stopped and took notice. A little man with a half-shaved mo stood there in attention, nose in the air, arms in there too. For no reason at all a passing Japanese tourist stopped and took a photo. And so it came to be, as the weather pounded Berlin, a new style of nose-pubes and a tyrant's salutation were born.