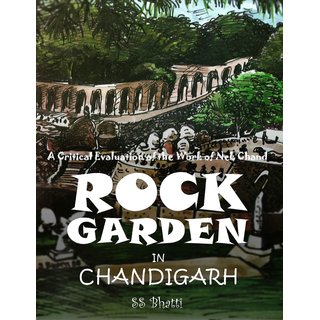 ROCK GARDEN IN CHANDIGARH – A Critical Evaluation of the Work of Nek Chand is original research thesis for which its author  SS Bhatti was conferred the degree of Master of Architecture [M. Arch.] in 1983 by The University of Queensland, Australia. As one of the three examiners had succinctly observed “The book is valuable one which records and analyses the work of a great, courageous and enormously energetic artist. Mr Bhatti has recorded his painstaking examination of Nek Chand’s creation, the Rock Garden in Chandigarh”. It is a definitive treatise on what is now called “Outsider Art”, so much so that articles based on it and published internationally by the distinguished scholar eventually made Chandigarh’s Rock Garden world-famous and its creator Nek Chand a global celebrity.

For its sheer thoroughness, insightful analysis, perceptive synthesis, and pragmatic comprehensiveness this book is the first one of its kind, and provides enormously delightful and profoundly enriching reading. It embodies what, according to another examiner, is “A positive reaction to a book that has been written with a thoroughness that makes it a most valuable record and commentary on an exceptional work of art.” It would be wrong to regard the relevance of this (pioneer) work as being confined to the field of architecture and landscape architecture. It has something to say to urban and social planners as well as to artists of all kinds. The major thrust (of investigation) is in the objective recording, and this is both a valuable task and one performed with great care and comprehensiveness by the researcher.

Using the architectonics of Humanistic Holism as developed by him the author has put his revealing research and highly inspiring findings in the context of tradition and modernity as extant in the rural habitat and India’s urban centres pointing thereby to lessons that architects, planners, and other professionals could learn and use to great advantage in meeting the challenges the stated disciplines face in tackling problems never encountered before.

Where Le Corbusier is regarded by many, including myself [one of the three examiners], as among the greatest individual creators of the culture of this century, the lowly sole author of Chandigarh’s rival attraction was sustained only, it seems, by his energy and a motivating love for the tradition and fantasies of his own history. Great care has thus been taken by the committed and self-motivated scholar to record and annotate the Rock Garden in photography, measured drawing and specification.

The book is written with sensitivity, and admiration the writer has for the artist Nek Chand is transmitted forcefully throughout the work.This all-encompassing, offbeat scholastic investigation establishes SS Bhatti as India’s foremost pioneer in the new-fangled field of Architectural Research to make it an authentic means of creating New Knowledge that is holistic as well as novel enough to inspire all genres of scholars in their work for years to come.

To prevent mindless damage to the natural environment being done worldwide in the name of development and urbanisation this book should be compulsory reading for all students, teachers, and scholars as well as administrators dealing with architecture, planning, landscape design, and allied disciplines. The book would also be an enticing embellishment for art-lovers’ private libraries.

About Author: Born in Amritsar on 24 June 1938, Dr SS Bhatti is Founder-Teacher, and Former Principal, Chandigarh College of Architecture, which was established on 07 August 1961 at Le Corbusier’s behest as the Academic Wing of the Great Chandigarh Experiment in Modern Urbanism that he was leading during 1950s. Along with degrees of B. Arch. [Bombay University], and M. Arch. on Rock Garden [The University of Queensland, Australia]; he holds three PhDs: (1) On Chandigarh; (2) On Guru Nanak Dev’s Japuji; and (3) On Golden Temple, Amritsar, all from Panjab University, Chandigarh, India. He belongs to a family of architects, artists, artisans, craftsmen, wood-carvers, and builders engaged in construction, art, and architecture since the reign of Mughal Emperor Aurangzeb. His father Sardar Balwant Singh Bhatti designed Gurdwara Panja Sahib, Hassan Abdal [now in Pakistan], and Takht Sri Kesgarh, Anandpur Sahib, in Punjab, besides Sikh National College, Lahore.