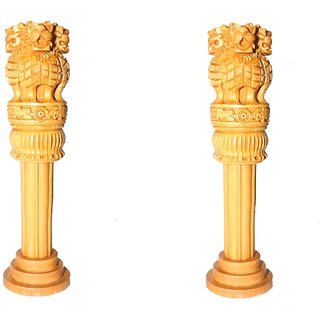 Kamakshi Art is Manufacturer and Exporter of all kinds of Indian Handicrafts items like Marble Handicrafts or Wooden Handicrafts. Beside this we have extensive varieties of Bags, Photo Frames, Key Chains and various decorative items.

This Ashoka Pillar is an exquisite piece of artwork. It is made by expert artists from Rajasthan India. It is a unique product from Craftsgallery.

We are offering the lowest price online.

The national symbol of India, the Lion capital of Ashoka stands tall at Sarnath. It is a sculpture of four Indian lions that are standing back to back and was originally placed atop the Aśoka pillar at Sarnath.

There are four Indian/Asiatic Lions standing back to back on the Lion Capital and it has been mounted on a short cylindrical abacus with 24-spoked Dharma wheels. There are sculptures of elephant, a bull, a galloping horse and a lion. It is believed that these animals symbolize the different steps of Lord Buddha’s life. Buddha’s idea in context to the dream of Queen Maya of a white elephant entering her womb has been depicted by the elephant. The desires of Buddha as a prince have been depicted by the bull. Buddha’s departure from sumptuous life is represented by the galloping horse while the accomplishment of Buddha is reflected by the lion.